The Kavli Trust has supported ME research at the oncology department at Haukeland University Hospital since 2011. The cooperation with the Kavli Trust has enabled the group to engage in new projects and make scientific advances in the field of biomedical research on ME/CFS.

Previously, the research group has published clinical studies investigating the use of the immune drug Rituximab in patients with ME/CFS ([i], [ii], [iii]). Rituximab is an artificially manufactured antibody which reduces the number of B-lymphocytes, a type of white blood cells which can develop into immune cells with a number of functions, among them antibody-producing cells. These studies have shown symptom improvement in approximately 60 % of patients treated with the drug. We hypothesize that ME in a subgroup of patients could be a type of immunological disease, in which B-cells and possibly adverse effects of antibodies play a part.

Five Norwegian hospitals are now collaborating on a clinical trial aiming to confirm or refute whether Rituximab can be useful in the treatment of ME patients. At Haukeland, the research group is also conducting a trial of moderate doses of the chemotherapy drug Cyclophosphamide, which has immunosuppressive effects and targets more parts of the immune system than the more specific Rituximab. Through these clinical studies, we are aiming to uncover possible treatment methods, while simultaneously working to shed light on the underlying symptom mechanisms in ME.

More than 200 patients have been included in our studies after thorough medical assessment according to internationally accepted («Canadian») criteria. These patients are subject to systematical and standardized follow-up in the studies, and regularly donate blood samples to a research biobank. Based on the material collected in the biobank, the research group has conducted a comprehensive and detailed mapping of the metabolism in 200 patients and 100 healthy controls. The project was supervised by the authors (Karl Johan Tronstad, Øystein Fluge and Olav Mella), and conducted in collaboration with Bevital AS and Per M. Ueland.

As a result of these metabolic analyses, we detected specific biochemical changes in the blood of ME/CFS patients. These findings have now been published in the Journal of Clinical Investigation Insight.

The analyses of blood samples from the ME/CFS patients showed that the levels of certain amino acids were reduced compared to healthy control subjects. The pattern of amino acid changes gave us important information about the symptom mechanisms, and in particular about the patients’ energy metabolism. 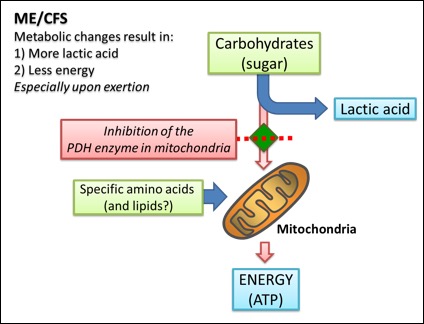 Under normal circumstances, human cells utilize carbohydrates, fats (lipids) and proteins (amino acids) as sources of energy, through catabolic processes in the mitochondria, the “powerhouses” of the cell. However, when we engage in intense physical exercise, there is a shortage of oxygen delivered to the muscle mitochondria (anaerobic exercise), at which point glucose is converted to lactic acid. Since lactate accumulates and there is lower energy yield, the body will say “stop” after a short time. The enzyme pyruvate dehydrogenase (PDH) plays an important role in the regulation of these processes, as it contributes to coordinating the utilization of carbohydrates, amino acids and lipids (fats) as energy sources. The new study suggests that the PDH enzyme is inhibited in ME/CFS patients, which may explain both energy shortage and increased lactate production in these patients.

In previous international studies, reduced levels of certain specific amino acids in the blood of ME patients have been reported. In our new study, all 20 standard amino acids were analysed in the blood of 200 patients included in clinical trials as well as 100 healthy control subjects.

A specific reduction in amino acids which are catabolized independently of the PDH enzyme was observed. This finding suggests that the PDH enzyme is not functioning as it should in ME patients, and as a consequence the cells increase the consumption of certain amino acids as fuel instead of glucose.

The reduction in specific amino acids which convert to energy was primarily found in women with ME. In male ME patients, the differences in amino acid levels were less significant compared to healthy men. However, we found increased levels of one particular amino acid which reflects the breakdown of proteins in muscle tissue in male ME patients. Since men generally have larger muscle mass than women, proteins from muscle tissue can function as an extra energy reserve increasing the availability of amino acids as an energy source.

The PDH enzyme is a key component in one of the most important pathways for conversion of carbohydrates to energy – a process which takes place in the mitochondria. If the activity of the PDH enzyme is impaired, the cells may respond by increasing the consumption of alternative fuels, which may explain the changes seen in the amino acid profile in blood from ME patients. Despite the body’s attempts at compensation, this situation would compromise the cells’ ability to adapt the metabolic processes to suit the ever changing demands for energy production. For example, physical activity could result in a sudden shortage of energy in the muscles, coupled with a build-up of lactate. These are normal effects seen in healthy people during rigorous exercise, but in severely ill ME patients these symptoms can be observed after minimal strain, such as getting out of bed and walking a few steps. Feedback from study patients indicates that they can relate these findings to their symptoms, including a fundamental lack of energy, malaise and lactate pains after physical activity.

When we proceeded to measuring the gene expression (mRNA) in white blood cells for a number of factors regulating the PDH enzyme, we found that several important factors which inhibit PDH function was increased in ME patients. Interestingly, these changes in gene expression were present in both female and male ME patients. These findings indicate that the PDH inhibition itself is the same for both men and women, but the effects on the metabolism may be partly gender specific.

In all likelihood, ME also encompasses regulatory problems in other parts of the metabolism, e.g. in the processing of lipids (fats). This is now the subject of further studies. Based on the results from the metabolism study, we hypothesize that ME patients suffer from a PDH enzyme inhibition which involves both a reduced ability to produce energy from carbohydrates and an abnormal production of lactate in the muscle even after minimal strain. An important focus for the current research work is to gain understanding of how a presumably faulty immune response after an infection could warrant such an inhibition of the cellular metabolism.

We theorize that the immune drugs on trial (Rituximab and Cyclophosphamide) affect the faulty signal from the immune system in such a way that the inhibition of the PDH enzyme is reduced. Thus the normal breakdown of glucose can be restored and the production of the body’s «energy currency», ATP, may adapt better to the patient’s activity level.

We believe that the findings in the study are important for the understanding of ME/CFS as a disease, and consistent with two recently published reports on metabolic changes in ME/CFS. The anticipated consequences of the observed metabolic changes are compatible with the clinical picture demonstrated by ME patients.