Thousands of children and young people have been given new opportunities in projects that Kavli Trust has supported. In the UK, Kavli Trust supportsorganisations such as New Writing North, Curious Monkey, FareShare North, REfUSE and Birkheads Wild.

“Kavli Trust continues to make a difference in the lives of individuals and their communities. It would certainly have made both the founder of Kavli Trust, Knut Kavli, and his father Olav, founder of the Kavli company extremely proud,” says says General Manager of Kavli Trust, Inger Elise Iversen.

Wanted to secure the life’s work

Knut Kavli took over as main shareholder and director of the Kavli Group when his father died in 1958.

Knut was passionate about culture and humanitarian work. He had a reputation for being generous and socially engaged like his father, and was happy to help young people both with their education and professional ambitions. He often did this discreetly.

“Knut and his wife Karin never had children. Thus, there were no heirs to take over The Kavli Group after him. Knut eventually struggled with a number of health problems, and he was thinking about what would be best for the company in the future,” says Ola Honningdal Grytten, who wrote a book about the Kavli Group on the occasion of the 120th anniversary in 2013, together with Kjell Bjørn Minde.

Knut did not want his father’s life’s work to weather and be distributed among many owners. His goal was to ensure that the ownership remained with one or a few owners, that it would grow and develop further and not least: that The Kavli Group would continue to be based in Bergen.

A different type of owner

After considering a number of solutions, Knut finally made a decision. In a letter he wrote to director Olav Jacob Dreyer in May 1962, we get an insight into his thinking:

As I am getting older, I wish to secure the future of our company in such a way that after my death I will not risk the company falling into the hands of or under the influence of outsiders, and by outsiders I mean people who are not working in the company in higher positions. I have therefore, after many and long considerations, decided to establish a charitable foundation…

Christmas 1961 may have been a decisive time for Knut. He reflected on the Christmas spirit and his father’s upbringing in a strongly religious community, where doing good to others was highly valued. For Knut, it was crucial to manage his father’s legacy in a way that benefited society.

At the same time, he wanted to ensure the future of the Kavli Group,” says Grytten. On April 25, 1962, the O. Kavli and Knut Kavli Charitable Trust, today called Kavli Trust, was established. From the outset, the purpose was ”to promote humanitarian work, scientific research and culture”.

This was to be done by distributing all profits from the company to good causes.

The artist Rolf Aamot and concert pianist Jan Henrik Kayser were the first to receive a grant from Kavli Trust. They received 5,000 NOK each, which is equivalent to 56,000 NOK today. This first allocation took place in February 1965, after Kavli Trust had spent a couple of years building up capital and ”finding its shape” with a three-member board, led by Knut Kavli.

“The Kavli Group was a company with a good reputation, and receiving support from the foundation was important. The money played a part, but the recognition that came with the support meant a lot to the recipients,” says Grytten.

The allocations from Kavli Trust were relatively modest during the first decades of its operation. Over the last decade, however, the sums have increased sharply. In 2012, 20.6 million NOK was distributed. Six years later the figure had more than doubled, to just over 131 million NOK. 60 percent of the funds go to humanitarian work, 30 percent to scientific research and 10 percent to culture.

Knut Kavli did not oversee more than the first allocation from Kavli Trust. In the autumn of 1965, he became seriously ill and passed away.

Continuity was nevertheless ensured, and the tasks were clear: The board was to allocate funds, manage capital and ensure that the company had a profit and return on the shares. No small feat for a board of three people.

Over the years, there have been some adjustments to the business model. Since 1994, a holding company, of which Kavli Trust is the sole owner, has been in charge of The Kavli Group management.

This allows Kavli Trust to concentrate on managing the capital based on the purpose that Knut defined in the early 1960s, and which still applies.

This also means that the Bergen-based company is still a group as well as a foundation that lives by its motto – love to share! 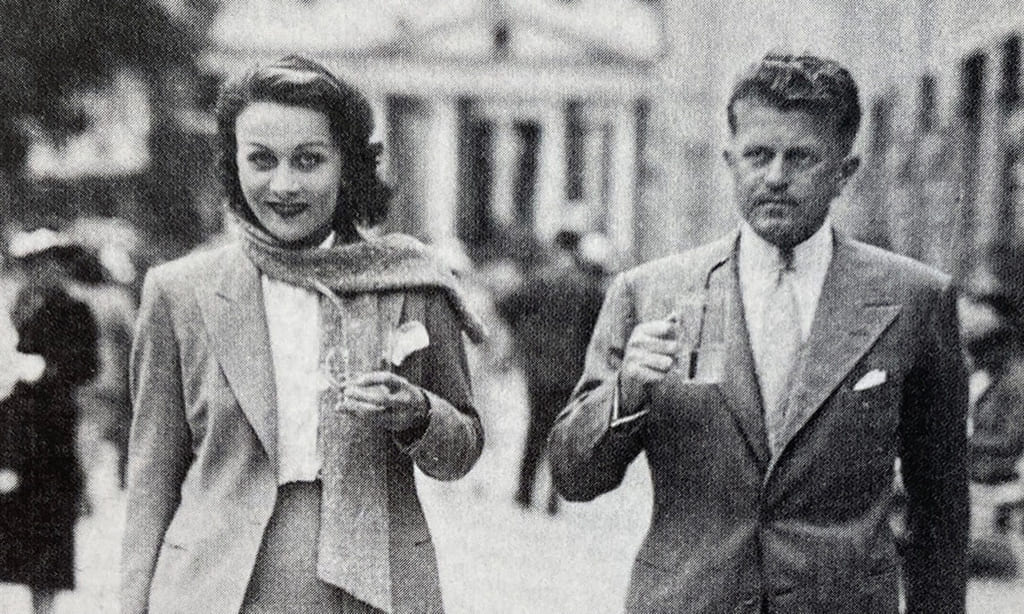 NEWLYWEDS ON THE TOWN: Karin and Knut Kavli as newlyweds in Marienbad in today’s Czech Republic. Karin was a renowned swedish actress and eventually became theater director at Gothenburg City Theater. She was also chairman of the Swedish O: Kavli AB from 1940 to 1980. In 1966 she donated 600,000 kr to Kavli Trust.