The next time you make yourself a sandwich with Primula Cheese’n’ ham, you can send a thought to Fannestranda by Årø outside the city of Molde. It was here, with a view of the majestic Romsdal Alps, green fields and a fjord full of fish, that the Kavli adventure began.

On January 7, 1872, Ole Knudsen Kavli was born, as the fourth child among six siblings. The family’s farm was small, and everyone had to pull their weight for the family to have food on the table. With cows, sheep, chickens and pigs, fishing and logging, they made ends meet through hard work.

Ole, or Olav as he later starts calling himself, quickly learns that frugality, hard work and saving are important virtues, and already as a seven-yearold he begins to save. He earns money on various small jobs, and his goal is clear: He wants to travel and start his own business.

When Olav turns 18, he has an equity of 60 NOK. This corresponds to about a monthly salary, and the money will be the start of The Kavli Group.

Just a few days after Olav has come of age, he goes to Bergen. The plan is to take evening classes at the Norwegian School of Economics (NHH), work during the day and gain valuable experience before starting up his own business. Only three years after he arrives in the capital of Western Norway, March 28, 1893, the energetic 21-year-old registers the company O. Kavli. His business sells cheese, butter and meat products, with whey cheese from Trøndelag as the most important product in the early phase.

Kavli is lucky with the timing of his startup. Bergen is growing rapidly. Dairy products are produced industrially, and luxury goods such as cheese and butter are becoming increasingly popular. With a general increase in prosperity in the population, success is around the corner for young Kavli.

And it will be a success. Through a century marked by two world wars, economic collapse and reconstruction, cold war and nuclear armament, the Kavli family builds up their food group, product by product. Sometimes one step forward and at least two steps back. In 1924, the company O. Kavli goes bankrupt after liquidity problems and some bad investments. However, only one month later, the limited company O. Kavli AS is established, and the business continues.

“The story of Kavli is fascinating,” says Ola Honningdal Grytten. The professor of economics knows the Kavli history well, having written “Kavli – an Industrial Adventure”, together with Kjell Bjørn Minde. The book was published in 2013, on the occasion of the 120th anniversary of The Kavli Group.

“The Kavli Group is very untypical for Norway and Bergen: a multinational company based on cheese, not fish.”

“Olav Kavli was a true adventurer who traveled with his suitcase full of cheese. He realised early on how important marketing and publicity were, and he considered each country where he left his suitcase packed full of cheese, as a new export country. This way he could eventually claim that The Kavli Group exported products to several dozen countries.” 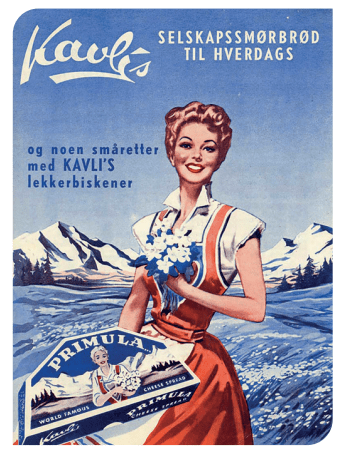 Olav Kavli strived to be the first on the market with his products. Around 1920, there was a competitive race in the international cheese industry to make a soft, tasty and not least, longlife spreadable cheese. Combining all three in one product was demanding, but whoever managed it would be successful.

In 1923, Olav and his staff had managed to make a processed cheese that tasted good, was not too salty and had a long expiry date. In September that year, he invited an exclusive gathering of guests to the secret launch of Primula, packed in a crescent-shaped box with a healthylooking milkmaid on the label. The cheese became popular, mass production started and in 1924 the trademark Primula was registered.

Primula was launched internationally in 1925 as the world’s first long-life spreadable cheese, and quickly took large chunks of the market at home and abroad. The cheese became the foundation for The Kavli Group’s further success.

The Kavli Group was also the first in the world to sell cheese in tubes, as early as 1929. When export and import rules in the 1930s made it difficult to sell Norwegian products to other countries, Olav decided to establish his own Kavli factories in Austria, Denmark, the UK and Sweden. In fact, the international part of the group gradually became more important than the Norwegian one. After World War II, the turnover volume almost quintupled in a few years.

“In everything Olav did, his ambitions shone through. In the course of 65 years, he managed to build up a multinational food corporation from Norway. Part of the success lay in his ability to recruit good employees, show them trust and let them work independently,” says Ola H. Grytten.

“Olav Kavli was the visionary entrepreneur who traveled the world as a living adventure. He probably visited about 80 countries. In over 60 of these, he sold his cheese, often by use of his charm. He is rightly described as the Ole Bull of spreadable cheese,” he adds.

The violinist and composer Ole Bull was the first Norwegian artist to achieve international fame.

All adventures have an end. After a brain haemorrhage in the summer of 1953, Olav Kavli never recovered. He withdrew completely from the daily management of his company. On September 22, 1958, Olav Kavli passed away, aged 86.

Four years later, his son Knut Kavli established the Kavli Trust on April 25, 1962, and made the foundation a unique owner of the entire Kavli.

Read more: The beginning of Kavli Trust: A foundation is born

”Primula was launched internationally in 1925 as the world’s first long-life spreadable cheese, and quickly took large chunks of the market at home and abroad.”